If you can’t wait for the Williams-Sonoma catalog each month, you’re 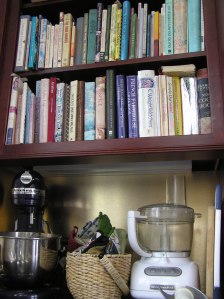 If you own folding herb drying racks and kitchen tools that no one else understands, then you’re probably a foodie.

If you take pictures of the food in front of you and send it to your Facebook page before saying Grace, you’re probably a foodie.

Last week a dozen foodies, including myself, friended Sugar, Spice & Everything Nice—a brand new Facebook page.   In barely seven days the page grew from a dozen to nearly 100 self-proclaimed foodies.

And like the calories in potato chips (gourmet, of course), foodie blogs, radio, columns, twitters, and television are irresistible pleasures for those who can’t wait to pick the fresh ginger from their garden and transform the brown root into a savory jam.

Recipes and food conversation blend faster on foodie web sites and Facebook than pesto in the Cuisinart.

Food writing was once relegated to a few magazines,  weekly newspaper features, PBS, and maybe a holiday feature on morning shows. Famous chefs?  Yes, but few.   The moniker “celebrity chef” had yet to rise.

But as new crop of culinary professionals–mostly inspired by California’s own Alice Waters–busted the East Coast’s Henri Soule and Craig Claiborne  traditions, the 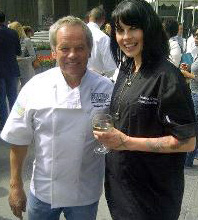 birth of celebrity chefs produced the likes of Wolfgang Puck and Mark Miller.

Actually, Chef Mark Miller, straight out of Water’s iconic Chez Panisse,  thumbed his nose at the hierarchy of Eurocentric cooking and food when he recreated  New World foods from Native America, Hispanics, Cajun, Creole and Tex-Mex.  America’s palate opened wide and Miller inaugurated his signature restaurant, the Coyote Café in Santa Fe, in 1987.

By 1993 the TV Food Network began broadcasting and created not only celebrity chefs, but multi-media juggernauts.

A Nevada foodie on Sugar, Spice & Everything Nice, blames her foodie passion on television. “It was the Food Network’s fault,” she says.

Others, like a Maryland foodie, Joyce DeMonbron, explains, “I was raised a foodie. My parents had friends from different countries and cultures…I ate Italian, Chinese, Pacific Islands,  Greek, Polish and Middle Eastern food, along with good old fashion cooking (from our family) garden, a cow for milk, and  pigs and chickens.”

My foodie beginnings follow DeMonbron’s—it started when I was a kid regularly exposed to cultural dishes outside of our meat and potatoes tradition. And the cookbook that changed my life was a 1971 gift, “The How to Grow and Cook It Book of Vegetables, Herbs, Fruits and Nuts,”  by Jacqueline Heriteau.  I still reference it.

I joined the  Iron Chef cult when The Food Network  brought it to America.  And when Bravo TV introduced the new Top Chef competition, I waited for each episode like a kid waiting for treats on Halloween.

By then, my daughter, Chef Dakota Weiss , was already inspired by her mentors, including her time at Coyote Café as sous chef, and eventually to the Dining Room at the Ritz-Carlton, Atlanta, where Iron Chef Japan, and three Michelin-starred Chef Bruno Menard, showed Dakota the fine essences of food and  palette.

It excited us knowing that Dakota had found her passion and was, by then, developing her own foodie groupies.

website should not send me into some kind of crazy swirl of overly sweetened chocolate and caramel sugar high, but it does. The premier countdown is on.  Oh good Lord, what will I do if I hear Tom Colicchio tell her, “Please pack your knives and go?”  What will I do if she’s in the final three or less?

Next week I’ll share the  drama of  this Top Chef business  that both concludes and begins on a hot summer Sunday evening in Sky Harbor International Airport in Phoenix.