The Circle of Life, the Planet, the Solar System, and Beyond

Also posted on Essence of a Family

I roused about the bed early this morning trying to grapple why some humans strike against others.

There are those of us who do not like the poor, while others disdain the rich. Human history is fraught with acts of violence over faith and religion. Ethnicity and race are easy targets for those who differ. Politics? Well, that’s a human condition that both serves and divides. There will never be a continued consensus in any political arena. And when we get to the basics it’s men vs. women, child vs. parent, and partners falling apart.

How is this so? Thousands of years of philosophy continues searching life’s answers while the circle of life continues rotation.

It’s always the circle. Like the wheel, life’s circles spin and travel. Spheres whirling like a top.

There was a time when I wished to study astronomy in college. Alas, my math acumen was insufficient to tackle the physics of our universe in an academic environment. My life’s circle spun away from math and turned toward language and communication. So today I marvel at the work of those who bring us deep space photos, of a space that I could not imagine. The photos far exceed my imagination. And the universal show is circular. A ubiquitous theme with infinite space somewhere in the middle.

But what does this view of astro physics have to do with life on this round planet Earth? It is a pattern, perhaps an inexact pattern, but a basic foundation that seems relevant.

I looked at the faces of young men filled with rage and thirst for blood on last night’s news. What life’s circle brought them to this point? Perhaps they slipped out of the circle and became projectile shards meant to shatter the natural universal pattern. Perhaps they are the comet hurling through space looking for a place to crash and end its seemingly lost way. Perhaps the soup of humanity’s common karma poisoned them with toxicity.

These questions rolled through me while I watched the night sky seemingly turn above me, grounded on this planet rotating at 1,040 miles/hour. It’s enough to give one motion sickness.

It came to me that I am blessed. No one, to my knowledge, seeks to disrupt my well being. My home and community are secure. How did I get here as opposed to the person who lives on the street sheltered by an oversized cardboard box?

M106 galaxy resembles a cyclone formation over the Pacific Ocean—a spiral mass spinning 20 light years away from where I sit typing on this laptop.

The Hubble Space Telescope captured a star cluster burst in the Milky Way—another circular event that occurred about a million years ago, says NASA astronomers.

All this magnificence everywhere, yet we find ways to desecrate the poor, the under privileged and less fortunate. Is this how human projectile shards shatter the inner sanctum of their circumferential beginning and seek to destroy as they develop?

The fortunate and the unfortunate. Universal justice or injustice? Karma? That’s a more likely explanation for me. We have choices. Library shelves are filled with tales of those who bore little wealth and achieved great accomplishments. Interspersed among those tales are the emperors who wear new clothes that are invisible to anyone unfit or “hopelessly stupid.” 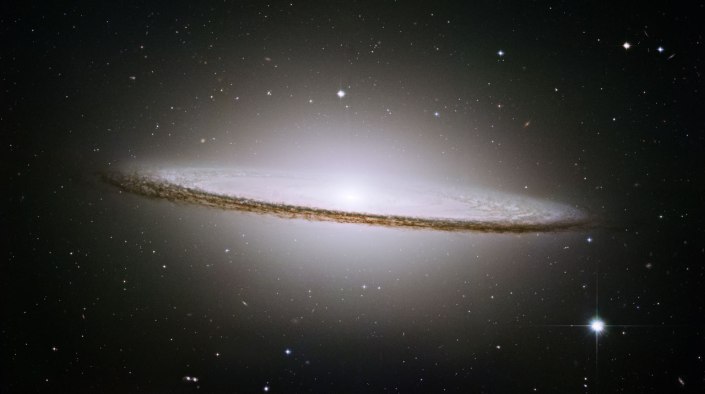 The Sombrero galaxy illuminates the night sky with its remarkable white light, “equivalent to 800 billion suns,” says the Hubble Heritage Team. You can see how this mass of energy is round like a Mexican hat. And look at the middle. What do you see? I see brilliance that I can only slightly comprehend.

What if we could better share and grasp the circular nature of life as opposed to disdaining those different from you and I? I don’t mean this in a Pollyanna-way. I mean this in a practical, every day way. The adage that peace begins with me, is like the brilliant center of the Sombrero galaxy.

What if instead of sneering at the person who swipes an EBT card while chatting on a cell phone we took the center of our inner light and made a silent blessing for that person’s well being? Do we really know that person’s story or condition? Probably not. What if instead of chastising the woman who walks the street, we offered her a smile that radiates the center of our own well-being? Do we have the right to judge her survival scheme? Unlikely.

Opening hearts and minds offers unlimited blessings and transforms the center of power in our own circle of life. To quote my friend, pay it forward. Invest in a brighter future for those of us on this planetary ride.

Postscript:  I had no ideas that this BuzzFeed had posted this on 11/17:  26 Pictures Will Make You Re-Evaluate Your Entire Existence
The universe, man… THE UNIVERSE.