The first of five monarch caterpillars on milkweed in my garden.

This story can also be read in The Cambrian

Embedded just over my right eye is a one-inch scar. I was a tad over three-years-old and a tad too close to a sharp hoe used to break up the desert soil for a garden. I was curious and anxious about this project. My godfather walloped that hoe into the clay soil and didn’t see me standing behind him when he raised the hoe toward the Spring sun, and WHACK!

“I nearly fainted when I heard you yowl, and turned to see you standing at my heels with blood running into your eye,” he recalled.

After my first set of stitches, he took me to the local farm supply and bought me my own kid-size set of garden tools. I had my own square of dirt to hoe, plant and rake without any further collisions with a sharpened hoe yielded by him, or any other adult.

So I can safely say that I’ve been gardening for more than a half-century. I’ve learned to appreciate the pollinators, bees, butterflies and moths. But I never shared an up close and personal relationship with them until this winter.

Monarch butterflies float and dance in my seaside garden. I assume they stop by for a snack as they make their way to one of their California coastal overwintering locales—two of them near my home.

owed her lead and added milkweed to my garden.

You see, milkweed is essential to this butterfly’s survival. The monarch lays her eggs on milkweed and then that larvae eat the milkweed, form their chrysalides on the plant, and then morph into the butterfly.

What happened to milkweed? Monarchs and their milkweed, according to a recent Denver Post report are “..victims of prairie conversion and increasing use of herbicides on genetically modified crops, which kill milkweed and other plants that serve as habitat for pollinators.”

Genetically modified crops (GMC) increase. Monarch butterflies decrease. Their future, according the conservation group, Xerces Society, is troubling. The rapid decline of the monarch population over the last twenty years, has fueled an effort to list the species as “threatened” under the Endangered Species Act.

I can’t imagine not mentally drifting alongside the orange and black wings of the king of butterflies floating in the air like winged flowers. And to imagine that there are those who call others who contest the wisdom of profuse GMCs in our environment flat-earthers!

Again, it comes down to conceptualizing that interconnectedness between you, me and the rest of our ilk to the beauty and value of the pollinating insect.

Which brings me back to my garden. A few weeks ago I announced on my Facebook page that I had new pets, two monarch caterpillars munching down one of the milkweed plants I put into my garden last fall. A few days later, another caterpillar appeared on another milkweed, and shortly thereafter, I had a total of five monarch caterpillars. They became a part of my daily conversation. Soon they would begin the process of metamorphosis, and for this I could barely stand the wait.

But, one by one, the caterpillars disappeared. One remained. It finally hung upside down to begin its 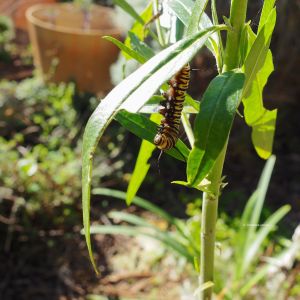 third phase into becoming a chrysalis. This I would journal with my camera every day. When I rushed out to check it the next day, it too, had disappeared.

I haven’t changed much from that curious and anxious three-year-old who stood too close to a garden hoe in action. Milkweed has a permanent home in my yard, like that scar just over my right eye.