Out of the Kitchen and on to a Bike Trail

Like a bees near the nest, boys buzz around the Cambria Bike Kitchen. On rugged bikes built for mountain trails, one boy pops wheelies, while another takes to the air over dirt mounds, then pedals his bike to where his buddy is about to practice balance while navigating his bike across a narrow piece of lumber over a muddy ditch. Inside the nest, Coach Aaron Linn chats with the grown boys — adult cyclists — busy tweaking gears and wheels of bikes in need of repair.

Linn steps out of the cottage-sized building that is cluttered with tools and bicycle parts. “Guys!” calls Linn to the half dozen boys. Suddenly, John, Henry, Alex, Anhase, Emiliano and Sage roll in front of me, and showcase every thing Linn has set out to train these kids: fitness, camaraderie, responsibility and respect.

Children between the ages of 8 and 14 spend an average of just over four hours on screen media, according to the 2017 The Common Sense Census. While their technology skills likely out perform mine, they are also at risk for obesity, lack of sleep and reduced performance in school. Which is one of the precise reasons why a few Central Coast cyclists have a dream — get more Central Coast youth involved with cycling and trained to compete in the National Interscholastic Cycling Association (NICA) — a program that offers interscholastic mountain biking programs for student-athletes across the United States.

Cambria’s Aaron Linn cooked up this idea for Cambria’s youth last year  — somewhere in between his business responsibilities with the Linn family’s businesses in Cambria, his volunteer soccer coaching and his own love of cycling.

Cycling became a part of his life as a 12-year-old when “A substitute teacher at Santa Lucia Middle School introduced me to competition cycling. I was hooked,” Linn said. And yes, he was, especially when he placed in the top 10 in a national championship one year after he began training. Linn remains an active cyclist and enthusiastically shares his dream for local kids with others.

Sharing Linn’s enthusiasm is Steven Anzel from K Man Cycles in Paso Robles, who hopes to eventually develop a composite team in the future. Like Linn, who encourages cycling with Cambria youth, Anzel holds a Thursday kids ride. “I’m inspired to encourage kids to ride,” Anzel said. Anzel attributes his enthusiasm to his mentors who influenced him the value of giving back.

San Luis Obispo’s cycling advocate, Jim Aaron, has invested 30 years into local trail building for mountain biking. He’s also the former executive director for Bike SLO (bikeslocounty.org) whose mission is to “ … Inspire, educate, advocate, and work to build a safe, healthy and connected community through bicycling.”  While efforts to get local youth involved with NICA have been a series of “false starts,” Aaron said, “I just keep putting it out there waiting for the right combination of student-athlete and parents to step up and become part of the project.”

NICA’s mission is “… (to) provide leadership, services and governance for regional leagues to produce quality mountain bike events, and support every student-athlete in the development of strong body, strong mind and strong character through interscholastic cycling,” as per NICA’s website.

Linn harbors no doubt that, “We could have future stars of the sport and many in our midst, if we support such programs as running and cycling which often go overlooked and (are) under funded.”

“Not every kid is geared for football or basketball,” Linn said. To Linn’s delight, he’s watched one of his soccer players improve his endurance since joining this weekly cycling program. “This is a healthy activity for our local kids,” Linn said.

“I am using NICA techniques, though we are not super formal and the kids are coming in small groups, which actually lends itself to me providing specialized training,” Linn explained his mentoring style. 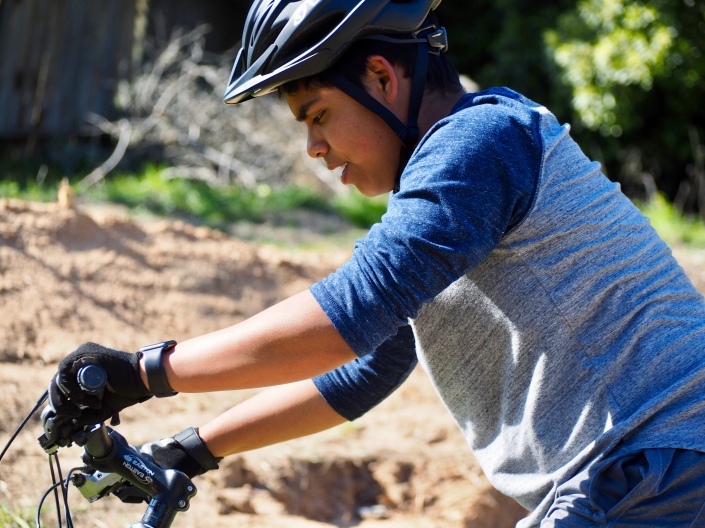 The cyclists learn to focus

The local efforts also include educating youth on the mechanics of a bike, traffic rules and regulations.

Cycling requires special equipment, especially for safety. The Cambria group formed a 501(c)3 nonprofit under the name of the Cambria Bike Kitchen. The building serves as a clubhouse for the young bicyclists, and the adult volunteers who sometimes ride with Linn and the kids, and the donors who bring in essential equipment. Thus far, the participants are equipped with proper cycling clothing like shorts, jerseys, shoes, gloves, and well-fitting helmets, funded by a recent grant and donations.

Both street and mountain cycling eventually takes its toll on the bicycle. So, the Cambria Bike Kitchen has also received donations of wheels, spare tubes, tires and lighting systems. (For the uninitiated, a bike kitchen is a place with tools, and parts made for cyclists and mechanics to repair bikes. Cyclists also learn safe cycling, and build community.)

Each child is charged with maintaining his or her bikes, working hours at a pump track, and to help develop new trails as they are made available.

To date, the project includes the “kids, the coaches and the bikes.” Jim Aaron wrote, “All we need are the parents.”

Rolling back to the old adage that Rome wasn’t built in a day, these three cyclists intend to keep the possibility of a Central Coast NICA team wide open. Jim Aaron best expressed the future: “The future of this project is that there are currently 17,000 high school student athletes participating in NICA, and that is huge. As soon as it starts in this area it’ll fill in and be somewhat contagious. This is what has happened in other areas of the country and it’s now expanded to 27 different states so it’s got quite a bit of momentum.”

Parents interested in having their children take part in these local programs can contact Aaron Linn via his email, aaron@linnsfruitbin.com.

*The online site of Journal Plus attributed this story to the wrong writer. Both story and photos are by Charmaine Coimbra