We have a new blog for the young children in your life:  Neptune 911 For Kids.

This fun blog features stories about ocean-hero kids, marine mammals, ways to save the ocean, and pages about the unique and weird creatures one might find in the ocean.  Visit.  Subscribe.  We promise  Neptune 911 For Kids to be fun and educational.

When I heard about the recent and amazing sightings of blue whales, Earth’s largest mammal, and large groupings of humpback whales in Monterey Bay I purchased whale watch tickets immediately.

With about 2000 blue whales present in the 69,375,000 square miles of the Pacific Ocean, the sighting of 50 or more blue whales in the nearby waters from Point Lobos State Reserve to Point Pinos in Pacific Grove, Ca (about a 2.5 hour ride from my house) commanded my attention.

I first whale watched in the 1980s as the grey whale began showing a comeback after years of slaughter.  Enterprising fishing vessels hauled curious humans to observe the grey whale migration just off the California coast.  For me, it was like a first injection of some addictive narcotic—but good for me.

The blue whales, however, were something I could only read about. By the 1920s, from hunting, their population dropped from 350,000 to a scarce 1000.  I mentally placed blue whales into the same category as mermaids and other fantasies of the sea.

Maybe seven years ago, a friend who frequents the Channel Islands said that he spotted a blue whale.  He was stoked.  It was that rare.  Might as well be a mermaid, I thought.

Last summer blue whales just off the coast made local news, but I didn’t have time to go see them.  Were mermaids next, I wondered.  It was that cool.

Blue whales are moving in for the krill.

Droves of blue whales have been spotted in local waters, indicating that the world’s biggest creature has rediscovered Monterey Bay as a favorite feeding ground…”It seems like they just came overnight,”  the paper quoted Nancy Black, a marine biologist with Monterey Bay Whale Watch.

Because they are feeding on a temporary bumper crop of krill in Monterey Bay, viewing a most spectacular mammal disallowed any procrastination.  And yesterday I, along with folks from just about any place on the earth (some languages I could not identify), boarded a Monterey Bay whale watch vessel and sailed out to sea.

Under a heavy marine layer with four to eight foot swells every few seconds, warm clothes and a hearty taste for the sea were essential.  Within a half hour the first 30-foot blue whale calling card shot into the air as it exhaled. In minutes  at least 10 blue whales surrounded us  as they scooped krill, came up for air, and dove back into the depths. 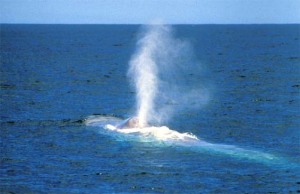 I tried comprehending some of these whales’ mind-blowing facts, like a blue whale’s 2-ton tongue, or its small car-sized heart, and that it was probably 25-feet longer than the 75-foot vessel floating among them. But the grace and beauty of their steely blue skin as their massive bodies curled as easily as ribbon as they plunged in and out of the water, and the passivity of their eyes when they measured us on the boat–now silent and speechless—that is what took me back.

“Folks, at the rear of the boat we have a humpback whale breaching,” broke the hush as did the crash of 35 tons of belly-flopping cetacean slamming into the water.

“Wowwwwwwww,” echoed from bow to stern.

Animated humpback whales, also feeding on the krill, stole the show with their antics.  One pair acted like kids in a swimming pool.  One smacked its 15-foot pectoral fin against the cool waters, and another whacked its pectoral fin in response—or so it seemed. 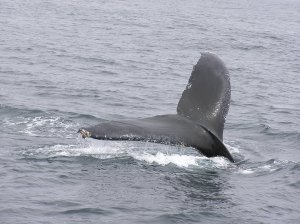 Our captain shut off the engines.  “We have a pair of humpbacks swimming beneath the boat now,” our guide announced. Suddenly a loud hum followed by an 8-foot exhaled water plume sprayed the folks standing starboard.

“Ewwwwwww,” remarked a young girl.  “Bad breath!”   (I’d guess my breath would be eww after a mouthful of krill).

The other humpback spy-hopped and gave us the eye.  They swam around our boat and made what our guide called a friendly encounter.

I, the one who has something to say about nearly everything, cannot find the exact word to explain the feeling of a friendly whale encounter.  My first friendly encounter was in San Ignacio Lagoon, in Baja California,  with a grey whale calf.  I had the same feeling yesterday as I did in the warm waters of San Ignacio.  It was luminous, buzzy, emotional, peaceful, nebulous, and I can’t prove these real sensations.

On the ride home I asked spouse if he felt anything special.  “Yeah, it was like the time we went to San Ignacio when that whale’s big eye looked right at me.  I thought for a moment that all the answers were there. That’s a little too weird, but yeah, it was the same thing today.”

As usual, most of my whale watch tour photography featured before and after shots (before it showed itself, and after it showed itself)—in other words, lots of water shots. I got lucky with a few humpback shots, even though the boat bobbed like a hapless cork in the swells.

If you are near this event, your spirit will thank you for experiencing these whales.  If you are landlocked, then maybe this video will help you visualize the majestic beauty that quietly dwells among us.