When World War II ended in a big bang, the growth of plastics paralleled the race to see who could blow up the planet first.

1951 was a banner year when chemists for Phillips Petroleum, Paul Hogan and Robert Banks introduced high-density polyetheleyene (HDPE) and polypropylene or PP.

Polypropylene is a more versatile product found from carpets to CD cases.

These are products that are inexpensive to make, lightweight, durable, and like Mr. McGuire advised the young graduate, Benjamin in the 1967 hit film, The Graduate, “There’s a great future in plastics.” Plastics trade well in today’s market and they are not going away.

Plastics are in everything—including our personal care products like toothpaste, facial scrubs, shaving cream, shower gels, and toilet bowl cleaners. Up to 10% of these products can contain polypropylene microbeads for the “scrubbing” effect.

The tiny, often not visible microbeads are meant to wash down the drain, which eventually winds up in the ocean.

Not a big deal? Yes, these tiny plastic beads are a big deal. From Beat the Microbead website:

• A single product may contain thousands of microbeads;
• Microbeads could constitute up to 10% by volume of a single product;
• Sewage treatment facilities are not designed to filter these tiny microbeads from wastewater so some microbeads will still be present in effluent water leaving the treatment plant
• Microbeads are found throughout the marine environment (from Lake Geneva to the North Pole);
• Microbeads will not biodegrade;
• They are ingested by various sea species;
• They can end up in the food chain;
• They attract persistent organic toxins (POPs);
• Natural, biodegradable and effective alternative ingredients such as ground nut shells and salt crystals are readily available.

When Carolynn Fox from 5 Gyres Institute spoke at a recent Monterey Bay National Marine Sanctuary symposium she noted, “Microplastics are the problem..it is mainly what we see on research trips…even in the remote south Atlantic.”

The concern about mircrobeads adding to the problem of microplastics in the ocean has caught the eyes of a few state lawmakers. Following a scientific paper published last December, “Microplastic pollution in the surface waters of the Laurentian Great Lakes,” (written by the 5 Gyres Institute and researchers from State University of New York, Fredonia), now has several Great Lakes surrounding states, including New York and Illinois, and municipalities in banning micro-plastics in consumer products. (New York Assembly unanimously voted yesterday, May 5, to ban microbeads.)

Referring to the peer-reviewed paper, Marcus Eriksen, the paper’s lead author and co-director of 5 Gyres Institute said, “We found high concentrations of micro-plastics, more than most ocean samples collected worldwide.”

California recently introduced a bill than would ban both the manufacturing and sale of plastic particles 5 mm or smaller in diameter.

Some manufacturers take issue with these environmental concerns, claiming that there is no proof that microbeads are harmful to the environment.

In a Time Magazine report published today, last week’s featured story in both Neptune 911 and Charmaine’s Muse Pallet introduced readers to marine ecologist at the University of California, Davis, Chelsea Rochman. She told Time: “The fundamental question is going to be: do we wait to take this material out until we prove that this microbead causes harm?”

Fortunately, the cosmetics industry aims to please its market. Personal care manufacturers like Johnson & Johnson, Unilever and Proctor and Gamble have either begun or promise to phase out microbeads in their products.

Are you committed to not using products with microbeads but unsure how to discover if the product you want has them or not?  Well, there’s an App for that!

You can download for free the Beat the Microbead app on your iPhone at https://itunes.apple.com/us/app/warning-plastics-inside!/id573546717?mt=8 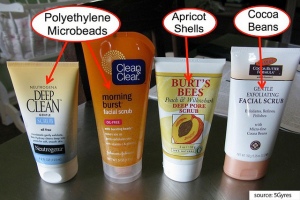