I’d guess that if most people had the opportunity to soar out beyond the Earth’s curvature, that the awe of its beauty would inspire them to serve each other and the planet. They might also understand that this service perpetuates their respective higher power or God. 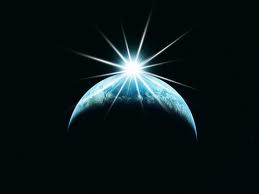 Concurrent to these dreamers I’d also hear others plan domination, control and how they might seek even more wealth from and around this big rolling universal globe.

Which is the better human?  I can’t answer that. But I can state that my preferred human is the one that seeks to preserve the globe and its inhabitants by loving and treating all well.  Of course we can’t love every person we meet—love is an earned and shared gift.  We can, however, seek ways to work around those who make our neck hairs rise and faces flush and contort with distaste.

These personal conclusions come from posting 100 Daily Good actions/events since last May.  On May 20th my annoyance with politicians, big business, failed spiritual leaders, and day-to-day life spurred me to jot a protracted list of what was pissing me off.  As I clicked away on my laptop my blog idea changed into an unexpected post and kick-started a daily search for good.

I knew it was out there, but in HD-transmissions broadcasted through my oversized television screen, were the BP oil spill, angry people calling our president vile names, economic destruction by ideology, protests defying the reality of our planet’s ill health, urbanites walking around a collapsed person on the sidewalk, pundits lying with straight faces, homelessness abounding while corporate CEOs were acquiring more wealth than ever before, and so on.  It is a despicable list.

And as if the universe was speaking directly at me, the wise man, His Holiness the Dalai Lama, was on that HD transmission speaking about compassion, temporary issues and that the world is better than even 100 years back—and I calmed down.  Peace comforted me.

The Daily Good began—posted on both my Facebook page and Vibrant Nation.

Reflection tells me that much has changed within my life since then.  I discovered and befriended many others who wish and act for the greater good.  Near my 40th Daily Good post two people at a party approached me and said, “I love your Daily Good.”  Wow.  Inching past 50 Daily Good posts, questions like, “Where do you find these?” started coming into my email box.

Admittedly, this exercise was sometimes as much drudgery as making me go out and walk or exercise every day. But now it equals my morning coffee and vitamin regime.

The pundits and hypocrites still drive me nuts. I don’t know how to fix those cultures that think living in the Middle Ages is a better idea.  But I’m shooting to seek and post another 265 Daily Goods regardless.

Civilization remains in crisis. I pray that each good deed done, sought, and then shared will help civilization rediscover balance.

My realization is that I want to take a ride around our planet with the folks who seek joy before wealth, and spirit before power.  Regardless of my bank balance (or lack thereof) I want to wake up daily and scream “It’s good!”