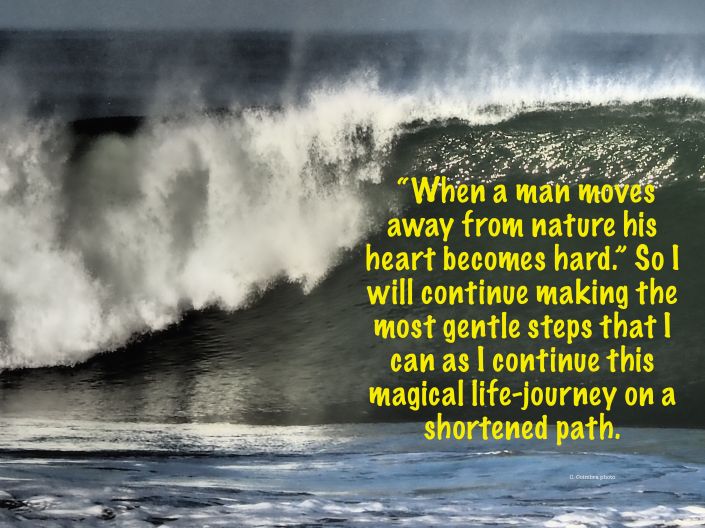 It’s Earth Day. At my desk in California, I watch the gray sky and wish that rain came with the dreary. But it doesn’t.

Cloudy days make for good writing days. It’s also easy on cloudy days to spend too much time on the computer. And that’s when a friend advised me this morning of a slander made toward me on this day when environmentalists and others think about the planet and its well-being.

I thought to slam back, but chose a higher road. Anger is a bitch. Who needs it?  In fact, my goal is to find that certain kind of peace that all religions claim to offer if one follows their path.

So here is the statement made in a thread that mocked environmentalists and the concept of Earth Day: “…there is a woman from CA who is a rabid environmentalist, especially where oceans are concerned. Of course, she’s also a very ‘financially comfortable’ liberal Dem who has houses in several states.”

The rabid thing might have some validity because I did froth for few seconds. Then I re-read the comment and fell into hysterical laughter because…well, anyone who intimately knows me understands that I’m NOT a “rabid environmentalist.”

Oh I do care and am concerned about the health of our oceans. But I’m not marching in the streets, writing letters to the editor, or shouting on talk radio shows. What I do is edit and write a blog called Neptune 911 that reports, from solid and reliable sources, news about the oceans. My concern doesn’t come from Google-U. It comes from direct experience and seeing the issues with plastics in the ocean, university sponsored workshops led by leading oceanographers, marine biologists, etc.; and webinars sponsored by same universities and the National Science Foundation. Furthermore, I don’t give money to Greenpeace or Sea Shepard. But I do belong to and donate a bit to the Society of Environmental Journalists, a professional organization “…founded in 1990 by a small group of award-winning journalists, including reporters, editors, and producers working for The Philadelphia Inquirer, USA Today, Turner Broadcasting, Minnesota Public Radio, and National Geographic.”

I know, that darned liberal media!

Now the funny part of this person’s comment is “…of course, she’s a ‘financially comfortable’ liberal Dem who has houses in several states.”   Why, “of course?”  How does one link all of this into one single thought?

That (tenuous) financial comfort came from both spouse and I working our tails off in a retail business for several decades, and living frugally.  I am unsure why that’s a problem, unless it has to do with an assumption that I’m a “liberal Dem.” Hmmmmm. Grammatically, that’s almost like saying, “I’d like some small shrimp.” In today’s world Democrats are automatically assumed liberal as opposed to a conservative Republican philosophy. But in the real world, not all registered “Dems” are liberal; nor are all registered “‘bublicans” conservative. And, exactly how does a person make that delineation when they have no idea how one votes? I am, and always have been, right down the middle. And most people when they first meet me assume I vote Republican—and many times I have.

The kicker is “..who has houses in several states.” OMG. Call the political police! Send in the righteous! I invested my money in real estate and, OMG I’m rabid, liberal, and own TWO HOUSES! Shame on me. Perhaps I should depend on the government for my retirement years? Isn’t that what liberals do? We rest on our laurels and take, take, take? And, how is it that one can condemn the poor in one breath, then turn around and use another’s success as a fault? That makes no sense.

That sort of commentary is divisive and hateful. And this is exactly why I have said the following many times before, stop the name calling and assumptions.

Americans, of all stripes and colors are some of the most blessed souls on the planet. Why is there this hate talk and finger-pointing? Why is it my way or the highway? Why must I belong to your club and your club only to be cool and right-on?

Every day my hair shows a lot more gray—some of it turning white. I don’t disguise my body’s truth. But that makes me no better than those of us who work diligently to maintain our youth when the Social Security years are upon us. But every time my increasingly pale reflection portraits me in the mirror, I realize that I have x-amount of years left on this planet. Time will come when I leave. When youth’s fire burned through me, I would have pushed myself right into the face of the accuser. But now, I understand that the peace and health that I wish upon the soil where I walk and the sea that lulls me to sleep at night, can only come by the peace I bring to myself.

A Lakota saying goes like this, “When a man moves away from nature his heart becomes hard.” So I will continue making the most gentle steps that I can as I continue this magical life-journey on a shortened path.