Crazy News Gets Spouse Cookies Instead of Jailed Wife

Spouse rushed from the morning news on the tube and into the spare bedroom when he heard  me rustle through an old cedar chest for my pink rabbit ears and skunk tail. 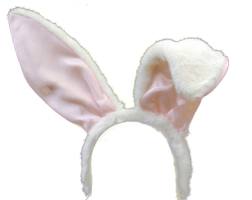 “NO darling!” he wailed.  “They’ll either haul your naked ass, but for the skunk tail and rabbit ears, to jail for indecent exposure, or the neighbors will simply close their drapes and pretend they didn’t see you—again–running stark naked and screaming down the street.”

“Shut up!  Help me find my running shoes,” I said while I dropped my sock monkey-nighty to the floor and strapped the skunk tail to my waist.”

“Seriously, Charmaine, you must stop this now,” he implored.

“How do the rabbit ears look?” I asked while adjusting them to my head full of uncombed hair.  “Are they straight?”

“Here, at least put on your robe,” he begged.

I brushed past him and mentioned, “You look really silly holding my lavender robe.”

“Ah, me? Silly? Sweetheart, you do know that you are buck naked except for your shoes, that awful skunk tail hanging midway down your bare and dimpled

behind, with a bare set of sinking and sagging 62-year-old  boobies that can’t even look up anymore, and worn out pink rabbit ears on you head?”

“I’m quite aware of my short comings,” I retorted while checking the ties on my shoes. “I’m off to scream into the rising sun.  I simply can’t take it anymore!”

He cut in front of me and barricaded his robed body across the front door.  “Oh no you don’t! You’re not leaving the house like this.  I can’t afford to bail you out of jail.”

“Jail! Schmail! I’m losing my mind and I’m off to blow off the insanity. So get the hell outta my way.”

I might weigh more than spouse, but he’s stronger.

“Nope. Not moving.  And if you try scrambling to another door, I’ll get there before you.  Besides, just because the news reports on the crazies doesn’t mean you should join the loony-crowd too.”

Spouse firmly placed both hands on my shoulders.  Pulled me closer and gave me a hug.  “Honey, it’s okay.  Take a deep breath and concentrate on all the good things in the world.”

Well, it was a tad chilly out this morning, and the fog left the asphalt slippery, and if I fell or tripped or something while waving my naked arms in the air, well, I could get hurt, and there’s not much cash in the emergency medical fund.

So I took a deep breath. I  unhooked the skunk tail, put the rabbit ears down, and wrapped the lavender robe, that spouse still offered, around me.

“I think it’s time you take a break from the news,” he suggested.

“Yup.  I’ve gotta get back on the positive thinking train,” I agreed.  “Hey, who wants homemade chocolate chip cookies?”

“Now there’s the kind of news we both can use.  I’ll get the brown sugar and chocolate chips down from that high shelf you’ve been hiding them on,” spouse said as he sighed and grinned as wide as the ceramic jack-o-lantern smiling from the table I decorated yesterday afternoon.