Early in Dakota’s career she worked under the chef de cuisine at The Mansion at Turtle Creek in Dallas.  There she met and observed celebrity chef Dean Fearing. This was a natural transition from her time with chef Mark Miller and his chef de cuisine,  Jeff Drew , at Santa Fe’s iconic Coyote Cafe.

She gave her new position her all until a swank competitor lured her to his Dallas restaurant and offered her the title of sous chef.  For the first time,  the restaurant owner printed her name and title on the stylish menu featuring French-inspired meals.

This was a double-edged dilemma for me: Her career had traction; but she was now deep in the heart of Texas—far from our northern New Mexico log home.

Our family tradition of the entire family attending each member’s birthday dinner was one of my favored times. But this time, one seat would be empty at my birthday dinner table.  I handled it well. (That’s a lie.  I sulked for the entire week prior.)

“Why don’t we just have some soup by the fireplace, a cake for two, and forget about the big deal of birthdays,” I suggested to spouse.

“Why would you do that?” he asked.

“I think it’s something I’m going to have to get used to and I may as well start it this year,” I whimpered.

Spouse placated me through my birthday date.  We drove home from work and he promised that he’d supply a dinner and we’d have a great time, “…even if Dakota can’t be there,” he interjected.

It’s dark early on my winter birthday, and lights glowed from our cabin windows when we pulled into the driveway. 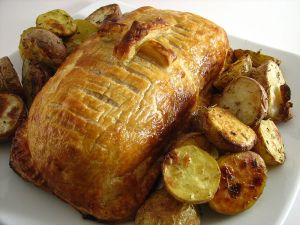 He said nothing.  I made my way from the vehicle and immediately smelled a little bit of heaven– garlic sautéing in olive oil wafting from our cabin’s vents.

I rushed through the front door. She stood at the range and  flipped haricort verts in my All Clad skillet while a beef wellington baked in the oven.  “Surprise! Happy Birthday, Mom,” she greeted.

I savored that moment watching last night’s Top Chef, Season 9, Episode 5, especially when Dakota explained to the camera how she had once sped her way through San Antonio, got an expensive speeding ticket, and kept on speeding through Texas, because her speeding across Texas was my second thought when I realized Dakota made a hasty trip to cook that surprise birthday dinner.

So when the Texas State Trooper halted the Top Chef cheftestant parade to Dallas on a lonely country road, Dakota didn’t have to face the law, but a nasty quickfire challenge instead.

Sweat glistened from the chefs’ skin as they tried to make sense of canned survival food that is marginally edible even in a survival situation–and prepare it in an open air kitchen under the hot Texas sun.

Hot how was it? One of my Texan friends, Mitzi Johnson Marx from Temple, defined last summer’s heat, “HOTTER THAN A JUNE BRIDE IN A FEATHER BED!”  Yes, she shouted it.

Dakota confided, “I opened up the knapsack and had no idea what to do with that stuff.  This one got me for sure.”

Survival food behind them, the cheftestants headed on to the lifestyle of the rich and want to be famous of Dallas for a progressive party. Dakota gets the bad news that she’s on the dessert team. “I’m not a pastry chef,” she will tell you.

But my kid still plays with her food, especially when it comes to dessert.  And Dakota serves the society queens her wickedly gooey bread pudding, which has helped expand my waistline in the past, with a shot glass (made from dates) filled with a milk shake.

Padma drinks her shot, and one of the dinner party guests says Dakota’s bread

pudding “is worth every calorie.”

I fret that the stuffy judges won’t appreciate Dakota’s whimsy when they call her to the judges’ table.  But they got it, loved it and called her dish nostalgic and comforting.

Once again, I exhaled and glad I didn’t fully discourage the lanky kid with frizzy hair and a future chef to not play with her food.