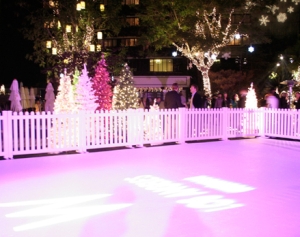 slide on synthetic ice in the 70-degree sun over the pool at the W, Westwood.

This is where we took a quick lunch with Dakota on Monday.

I ordered the pumpkin bisque soup that I’ve craved since posting the W’s Thanksgiving menu on a recent blog. With Episode 6 of Top Chef Texas, set to broadcast in two more days, I  asked, “So, baby girl, any changes going on since all this Top Chef business?”

Our server, visibly nervous serving the executive chef and her parents, quivered when he placed the bisque before me.  Dakota’s face changed from daughter to boss.  “I don’t see the maple syrup on the soup,” she dryly stated to the server.  (“Why me?” I sensed him kicking himself in the arse realizing a screw-up and right in front of Chef!)

Dakota switched back to daughter.  “Yeah. We’re incredibly busy and booked solid at the restaurant. And get this, last night I went out for dinner after work, and people  stopped me and asked if I was Dakota on Top Chef!” 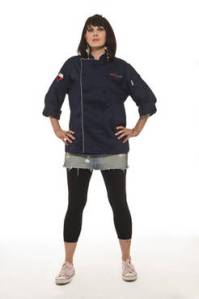 That’s so LA. Everyone wants to know a celebrity.

“Sounds to me,” I prefaced after nearly licking the last of the pumpkin bisque from the bowl (it was that good), “like the heat, stress, and exhaustion of the summer in Texas was worth it.”

“Definitely.  It’s not so much the celebrity as it is to watch and feel the changes both professionally and personally,”  Dakota admitted.

Watching last night’s  sixth episode of Top Chef I knew that by the time this episode was filmed, Dakota, as the rest of the cheftestants, were long into this production–and for many, out of their comfort element.

Dakota alluded to this when she answered a  reporter’s question for the online magazine, Rage. “What has been the toughest part of this process (of filming Top Chef)? “  Dakota: Realizing that I am not as “tough” as I thought I was. Having been put into bizarre and unusual circumstances really puts you in tune with yourself. It’s a completely different world.  I am used to being the one who makes the decisions and having the final say on everything…there, well…not so much.

The quickfire challenge was creative use of a designated mother sauce. Chef Dean Fearing,  Dakota’s early career executive chef, judged the cheftestant’s mother sauces.  “My least favorite (pause), Dakota.  I didn’t like the peach in the bechamel…”

Oh peachy! He placed her on the bottom of the quickfire challenge.  When the camera pulls off of her, she leaned behind the taller contestant in front of her–she was not a happy camper.

I can’t fathom how one cooks 200 steaks at one time and make each one perfectly medium rare.  Fortunately Dakota went the first course route where she and her team served gazpacho.  It passed.

Gazpacho and Dakota are long time friends.  Whew. Dakota and other cheftestant, Heather, however, are not friends.  Dakota called her a bully.  Here’s what one blogger wrote, “Dakota called Heather a bully and said she would be the first one she would boot from the island. Eek. -“

I dread each episode in fear of hearing Padma tell my daughter to pack her knives and go.  We made it through another episode…

Milkshake was a favorite.  Click this for the recipe:  Dakota’s Banana Bread Pudding