Neighbors actually talk to each other in my neighborhood.  Here’s a recent conversation that I overheard between spouse and another retired man as he walked his dog. 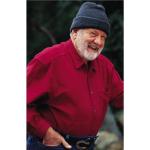 “It sure is.  It’s the kind of day that makes me glad to be retired, even without my late wife,” he noted. He lengthened his pooch’s flexi-leash.  “I’ve learned to enjoy life  without my  wife—she died 12 years ago.  But I’ve gotta friend—he just turned 70—and all he can think about is his old pecker, young women, and making money.”

Spouse gasped.  He managed, “Is that so?”

“That’s the truth.  He bragged about getting himself some Viagra through his insurance.  I’d guess he thinks he’s some kind of stud now.  If I ever catch him eyeballing one of my daughters—they’re all good lookin’ and under 40—he and I are going to have a long talk.  I surely don’t want to have grandchildren by that old fart!”

“Well, did your friend have a medical problem?” spouse quizzed.

I sprinted into the bedroom and buried my face into my pillow to conceal my guffaws.  I’m sure this conversation wasn’t meant for my ears.

That same night the current controversy over insuring contraception for women raised its ugly head. Religious leaders squawked loss of religious liberty;  politicians, like Sen. Kelly Ayotte, R-N.H, howled, “This is not a women’s rights issue, it’s a religious-liberty issue;” and so on and so forth.  Blah, blah, blah, goes the 24-hour news carousel—spinning so fast one could get motion sickness.

Meanwhile, tired 70-year-old penises can straighten up and spew the juices that make babies, with no legal confinement.

To be clear:  If one believes that birth control is fetal genocide, so be it.  One has

the right.  Even in the Catholic Church—the faith that prohibits birth control—its faithful uses  birth control via modern contraceptive practices.  Whether it’s 98-percent of Catholic women or not who use birth control, the fact that we don’t see many modern Catholic families with 10 children in tow, as in my youth, paints the picture.

This drama of predominately men standing against women, insurance and birth control is the newest low in American political maneuvering.

And it seems to me that women everywhere, as well as, our planet (aka known as Mother Earth), are under the same attack.  The assaults appear multifaceted by conservative power mongers that wear all sorts of religious symbols as their source of righteousness.

My concern, for this moment, is American women.  We are a unique nation with just freedoms—including freedom of religion.   Sally and John have the right to believe that life begins at the moment of conception, while Parker and Catherine have the right to believe that human life begins with the first breath.  It’s that simple.  It’s silly to debate which belief is godlier than the other in a political or social conversation.  But at this very moment, in the House of Congress and the Senate and the President, these rights of belief are under fire.  The looser is the woman. And even greater, the looser is American society as these current “issues” are intellectually dishonest political talk—or false framing.

Meanwhile, my neighbor’s 70-year-old buddy needs not worry about his insurance-qualified purchase of Viagra for his “…old pecker,” that can randomly inseminate fertile women unable  to afford modern contraception because of lack of insurance based on someone else’s spiritual belief–or worse–based on her inability to afford insurance.

The equation:  Contraception + Viagra = A Literal and Figurative WTF moment.