“Would You Sleep With a Black Man?” — Thoughts On Racism

Passionate and powerful writers lay their words on cyber paper about the state of racism in America today.  Some scribe and speak (lightly veiled) disgust towards the Civil Rights Act and the fact that America’s president is partially black—of certain African descent, no less. Others, and possibly the majority–based on the last presidential election—are color blind.

Barack Obama’s karma led him to rekindle and review the state of racism in America.

What I’ve read and heard during this 50th anniversary of the great speech by the late Rev. Martin Luther King, Jr., forces me to share the reasons why my emotions run high on such a day.

This isn’t a my best friend is black kind of story.  This is an aging white California girl’s take and history with people of more skin pigment than I.

“Would you sleep with a black man?” one of my friends asked after we killed off a bottle of wine.  Before I answer that, I’ll recall my view of racial experience first.

I grew up in the Antelope Valley, 60 miles north of Los Angeles in the Mojave Desert.  Developers wrote into their “rules,” that no Negro man could purchase property there.  But someone set aside  a desolate corner of this desert for the Negro.  It was a kind of black desert ghetto.  When you drove thru Sun Village, you rolled up your windows and locked the doors, even without air conditioning on a 110 degree  desert day. 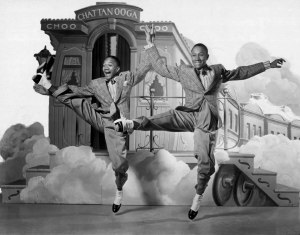 with little prejudice.  He danced.  He worshiped the dancers before him, from his Irish-American kin like Donald O’Connor to the amazing Nicholas Brothers.  He copied their moves.  My interpretation:  Dance, good.  Dancers, really good.  No color noted.

When I watched Nightly News in the early 60s and saw the Negro children in the South assaulted by fire hoses and dogs, I cried.  How could this be? Why would this be?  I didn’t know any Negro children, but I still didn’t understand how police and firemen could do such a thing.    This went against everything I had learned in nine years of Catholic teachings.

In high school I struck up a friendship with one of the few black girls who attended that mostly white and Hispanic cultured Catholic high school.  She never came home with me, nor did I go to her home.  It was as if there was some unspoken rule.  We, however, shared the same secrets and dreams with each other.  I lost touch with her when we graduated. In truth, I lost touch with mostly everyone from that school—so I can’t b lame it on race.  Besides, those Motown girl groups sang my thoughts and feelings every day on the AM radio station.

But my life went on to live the white California girl lifestyle filled with tall blonde men with blue eyes. Surfers. Cruisers. Rock stars.  Then one day a black musician walked me to my car, grabbed me and kissed me hard and with passion.  I pushed him off and said, “What the hell are you thinking?”  He said that he thought I was different, then passively walked away.  He never acknowledged me again.  I never had the chance to tell him that I was married and 2-months pregnant with my first child, and it was his aggressiveness, not his color, that made me angry.  He could have been Mick Jagger and I my reaction would have been the same.

Concurrently,  I created a line of patchwork clothes with a printed catalog that showcased my designs.   Modeling my patchwork skirt and cropped patchwork top was my husband’s secretary—possibly one of the most beautiful women I’ve met with skin like slick oil fresh from the ground.  When I met her, I begged her to model my clothes—especially the ones that let her luscious black skin show.

But my telling moment was when I met Cousin Howard from Mississippi.  Now, Cousin Howard was about 3-times removed, and was born and raised in small town Mississippi, a town named after that part of the family.  When he visited us in California, he boasted at dinner, “California is real nice.  But why you Californians let those (n-word) run wild in this state is beyond me. Back home we keep those people under control.”  (He didn’t say “people.” He used another hateful racial slur.)

I thought him making a bad joke until  I visited him in Mississippi.  He meant every word.  He carried a small loaded gun in his dungarees pocket just in case one of those (“n-words”) got out of line.  My scheduled week-long stay under his gracious Southern hospitality lasted just two days when I ran and boarded the first flight back to Los Angeles. I feigned sickness.  The environment did, indeed, sicken me.

Down the desert road came a media personality. Handsome. Worldly. Creative. Just my type, including the tall—until he mentioned his membership in Gov. George Wallace’s  militia—that group of Alabama-folks dead set to prevent desegregation in that state. I let this lovely man melt into the shadows of my life because I believe there is a certain kind of poison that comes with this innate hate of another human because of their difference.

No one taught me racism, even though I did hear racial commentary as a kid.  In today’s world that commentary would land in the politically incorrect column.  I’m glad that it is politically incorrect.  No one wants to hear why he or she  is considered less of person than another.  There is enough challenge and worry in life as it is.  No one has yet to sell me on why one race is better than the other.  It’s like those miserable high school cliques that determined who was cool and who wasn’t.  How did these decisions become dogma for the moment?  The key phrase is “for the moment.”  Temporary.  Short-lived.

I’d like to think that as adults we have left behind the clique mindset.  But it appears that a group mentality remains, and it is a sad commentary on us as an alleged Judeo-Christian nation.

So my friend still nags, “But would you sleep with a black man?”  I laugh and leave her to wonder.