Putting the Brakes on the Malheur Miscreants 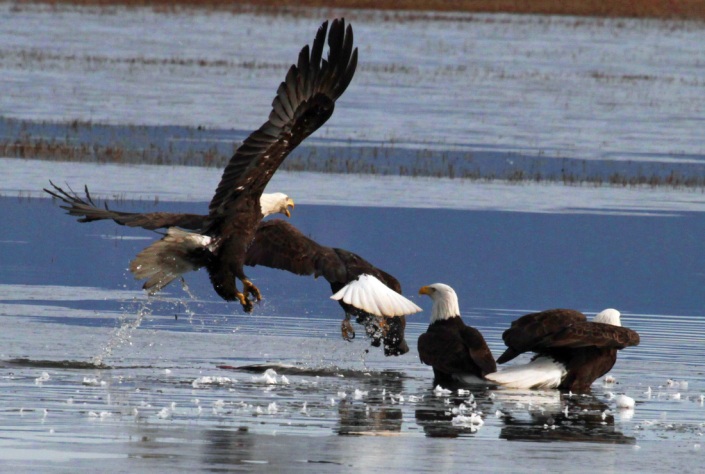 Editor’s Note:  After 41 days of occupation, the standoff no longer stands.  For an update by Jake Klonoski, please scroll to the end of this post.

Saturday, I sliced into a medium rare steak hot off the grill. Smothered in garlic, salt and pepper, it was delicious. The evening’s news rambled in the background. When the news anchor turned to an Oregon report about a group of armed men still holding the Malheur National Wildlife Refuge hostage, my blood pressure jumped a few points.

These good ole’ boys took a purposeful wrong way route in hopes they might have a head-on collision with their imaginary boogey-man, our federal government. Armed with military style weaponry, unlawfully but peacefully seizing (they broke in and took it over while it was closed for the New Year holiday) a federal building that houses priceless artifacts, and headquarters a wildlife refuge that draws in and protects nature’s amazing beauty, these fella’s decked in cowboy hats, camos, and open carry holsters with gun,  pretty much pushed the limits of my attempt to find any good in their behavior.

The wannabe cowboys say it’s about the land. They say it’s about their home on the range and their right to run cattle, mine minerals and cut timber. Balderdash!  It’s a sorry excuse to play militia, get 15 minutes of fame, and grab a whole bunch of land and use it until it’s all used up.  Naturalists, scientists, environmentalists, archaeologists, bird lovers, nature lovers, hikers, and even more so, the regional native peoples and the local community don’t even register on these sorry souls’ Richter Scale.

And that’s how I started my 30 Mindful Days project–frustrated and pissed off.  How in the world could a gaggle of misfits even think that they are patriots by closing off the refuge, tearing down fences so that cattle can stomp over environmentally and culturally significant land, and now use federal government equipment to rip in a road with out an apparent ounce of thought about the probability of destroying ancient artifacts that help us learn more about our land and our selves?

Oh how I wish I could march myself up to this blockaded refuge, and let them have it! These boys stand against everything that is sacred to me in that I appreciate the value of untouched soil and preserving land for nature’s needs and our ability as humans to let nature enhance our inner selves.

Some folks say to quit eating beef. Not all beef is raised by nincompoops. There are many responsible ranchers responsibly raising beef with the least amount of environmental impact. (The source of my Saturday night steak.)  Birders threaten a flock of counter-protestors at the refuge. Maybe so. But when  I envision the serious birders who I know trying to protest at the refuge, I see them gather together until one of them sites a migrating rare songbird flying overhead.

Meanwhile, most every morning during my mindful project I rise early and read about a project called A Force for Good. If ever there was a time to be a force for good, it is now. The last violent vestiges of humanity hold on to the lost belief that fear, threatening behavior, belligerence, and guns built for war, are the only way to achieving goals. Regardless of their continental location, their behavior mirrors each other. And the cohesive commonality is the leaders of these groups and/or movements claim to have a direct link to God. It is God, they say, that has driven them to this behavior. (Does God pack a deadly weapon or two?)

How do we become a force for good when the barrel of a gun or the edge of a knife is before us?

Well, to explain that, I’d have to write a book, so I suggest that you pick up a copy of “A Force for Good” by Daniel Goleman.

From my blog, The Daily Prism, I know that there is a kindness revolution in operation. Kindness driven by compassion isn’t loud, nor dramatic. In fact, it is those remnants of anger, fear and hate that become the drivers of this kindness revolution. An eighth-century Indian sage, Shantideva noted that enemies are “your best spiritual teachers.” Why? As Goleman explains, “… because they give you the opportunity to enhance qualities like tolerance, patience and understanding.”

But how do I, feeling helpless in watching this blatantly wrong occupation going on in a wildlife refuge (of all places!) find tolerance, patience and understanding?

While I might find patience with and understanding how and why these refuge occupying men think, I’m going to miss out on the tolerance part. Tolerance, to my way of thinking, comes in different formats.  Do I find tolerance of those persons different from me as opposed to fear and hate? Absolutely.  But must I be tolerant of miscreant behavior? No. This is where I must apply patience and understanding, and still try to be a force for good.

In other words, if my intolerance of another’s behavior cloaks me in anger that takes negative action, my mission fails.

This brought me to a recent story in The Oregonian. It reads,

Critics of Ammon Bundy and his followers occupying the Malheur National Wildlife Refuge have launched a protest designed to line the pocketbooks of Bundy’s opponents.

The campaign, founded by a pair of brothers from Oregon, is known as G.O.H.O.M.E, an acronym that stands for Getting the Occupiers of Historic Oregon Malheur Evicted.

Perfect! I can take positive action that might put the brakes on miscreant behavior, or at the least, benefit organizations or groups that I feel work for a better world, not a greedier world. G.O.H.O.M.E’s mission reads:

Let’s turn the illegal Malheur NWR occupation against itself! Your per day pledge will be divided equally among the four worthy groups listed below. Starting from January 2, 2016, for each day the illegal occupation of the Malheur NWR continues, your total pledged amount will increase. So far the occupation has gone on 18 days so your total pledged amount would equal your per day pledge x 18. Join us as we turn the Occupation of Malheur NWR into an #occupyathon for good! With every pledge, we will increase the pressure on the occupants to pack up and GO HOME! Please provide your email and we will contact you for your final contribution when the Malheur NWR is open and public once more #GOHOMEMALHEUR #occupyathon

I pledged — something that I don’t usually do. I don’t want to give up these public lands to no trespassing signs and self-appointed righteous buffoons in cowboy hats, camos, and loaded weapons. Nature’s beauty is a natural force for good.  And I don’t want to give up my occasional steak or hamburger either. So, I pledged $2 a day for every day these good ole boys occupy the refuge. They are now helping support Friends of the Malheur National Wildlife Refuge, Americans for Responsible Solutions PAC, the Burns Paiute Reservation, and the Southern Poverty Law Center.

Read: Malheur Refuge Takeover Just the Latest Twist on a Long Running Story, for a historical review of the region.

A note from Jake Klonoski:

Forty-one days after out-of-state intruders seized the unoccupied Malheur National Wildlife Refuge headquarters, the Refuge was freed and back in control of the public.

Thank you to each of you for contributing to the non-violent pressure this campaign exerted on the occupiers. And thank you for your donation, which will help rebuild the physical and civic damage done by the occupation. As promised this email is focused on how you can Make Good on your pledge – and how we all can show that this type of campaign results in tangible benefits in the real world. By fulfilling your pledge you show that this model is effective and can serve as a deterrent to future coercive Bundy-style occupations. We need the final donated amount to be BIG, so that history records that the Bundys raised a TON of money against their own cause through their futile occupation.

Donating is easy. We offer below 1) an online method or 2) a by-mail method of donating. It is your choice which you prefer. The most important thing to know is that you are donating DIRECTLY to the Burns Paiute, Friends of Malheur NWR, the Southern Poverty Law Center, and Americans for Responsible Solutions. Though this requires you to donate four times, it will allow you the assurance that the G.O.H.O.M.E. campaign will take NONE of your money – we will never touch it. Every penny goes right to the four groups and their Good Works. It has been our privilege to be a part of this effort, and we do not want the campaign sullied by allegations of financial impropriety.

…Thank you for your donation and your push for some GOOD to come from this occupation. And thank you again for the privilege of channeling your voice in support of freeing Oregon’s Malheur NWR and returning it to the Birds – and to the American people.

This dark time will hopefully brighten into a beautiful new day for the Malheur NWR, for eastern Oregon, and for us all. The Malheur is a place capable of such magic, as observed by an Oregon poet-laureate:

Thank you for your donation and your push for some GOOD to come from this occupation. And thank you again for the privilege of channeling your voice in support of freeing Oregon’s Malheur NWR and returning it to the Birds – and to the American people.

PPS. Similarly, some pledger wanted a means of supporting the people and business of the Burns and Harney County who stood bravely throughout the occupation despite the challenge to the community. After researching it, our best suggestion is to travel to the area and spend your money and share your goodwill there. There will certainly be a celebration when the Malheur NWR is officially reopened (donations to Friends of Malheur NWR will help pay for that) and, remember, it is your Refuge. Try to get out there, see what you have helped protect, and offer your support directly.

PPPS And for those of you who like to get your hands dirty, the Oregon Natural Desert Association is collecting volunteers to help work to rebuild and repair the Refuge and the Refuge headquarters. If you are interested, click on this link and volunteer. And be sure to tell us about it!

PPPPS Now that Cliven Bundy has been arrested in Portland, it is possible all these reprobates will be put on trial for their illegal occupation and past misdeeds here in Oregon. Such trials are open to the public and if you want to see Justice in action, check in at the Mark O. Hatfield U.S. Courthouse in Portland. It is your right as a member of the public to witness the wheels of justice turning (though be warned, the wheels turn slowly).

A journal with 48 nature contemplations prompts.

The “Sea Monster” That Won’t Go Away–NEP20b, AKA The Blob of Warm Ocean Water