Spring break at Scottsdale Culinary Institute gave my daughter, Chef Dakota Weiss, now a Top Chef Season 9 contestant, time to stay with us in our northern New Mexico log house in the middle of an apple orchard.  Beautiful place.   True to the Top Chef public relation media releases about Dakota, she loves my gardens.  And my New Mexico garden was spectacular.

Garden in An Apple Orchard

Under the fresh spring sun, Dakota and I relaxed on the expansive wood deck and admired the blossoming apple orchard and the sprouting spring peas in the garden when an ominous movement beneath a wood box near the garden faucet caught my eye.

Garden-vigilance was essential because hundreds of wilderness acres began at our northern property line.  Our irrigation ditch and the river that etched our southern property line attracted the wild things from the north.  This included fox, bear, bobcat and snakes.  My fantasy world convinced me that our snakes were benign until my neighbor revealed that he removed a rattlesnake from the expansive wood deck from where we lounged.  That’s a holy crap moment in my life.

Mindful of that memory, I grabbed the nearest hoe and Dakota grabbed a rake.  We tippy toed toward the spigot and gently lifted the plywood.

“Yikes!” we screamed together . Okay, we probably screeched  a profanity. A six-foot, four-inch snake hissed back at us.

“It’s not a rattler,” I confirmed with hoe keeping distance between the unhappy reptile and I.

“Looks like a coral snake,” Dakota withered with her rake ready for the impaling.

“Too big.  I’m going with king snake, which is a good snake…but it can go elsewhere.  Let’s push it out into the field.”

We squealed and squirmed right along with the serpent, who slithered away from the field and sought   refuge on the wood deck instead.  Apparently snakes don’t herd.

“Oh, Mama, this is a nightmare. What are we going to do?” Dakota asked with her face as contorted as the snake that now raised its neck and began crawling up the logs right next to the sliding glass door. Before I could find a calming answer, it had wound and knotted itself into the exterior pipes for telephone and power.  My solution: Call the neighbor who removed the rattlesnake.

Fortunate for this reptile, it wasn’t in Texas sometime last summer and the first quickfire challenge for this year’s Top Chef 16 contestants in last night’s Top Chef, Episode 3.

The Bravo TV commercials let us know “mother effin snakes” was on the menu.

Now, I recall Dakota’s stay in Shanghai as a guest chef for the Shanghai Ritz-Carlton.  At day’s end, her hosts escorted her to the restaurants they frequented.  Protocol insisted she bite into tiger, dog and the like.  “I didn’t like it, but I was a guest chef and the Chinese chefs were gracious and happy to introduce me to their food.”  But like me during my 3-week Asian tour, Dakota washed down the less appetizing foods with a whole lot of Asian beer.

No surprise, on her first quickfire challenge, she explained to the camera, “I 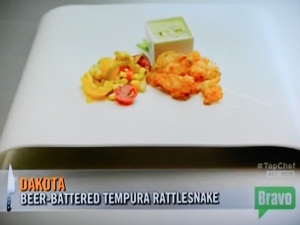 don’t like rattlesnake at all, but when I think snake, I think beer.” So she made a beer batter and deep-fried the rattlesnake and won the competition.  The judges loved her zucchini almond sauce and succotash side dish.

While America watched this first full on quickfire challenge , Dakota was on her 10th hour at work, on  her feet wrestling with another kind of challenge—an unheard of crowd of Wednesday night diners at Nine-Thirty (the restaurant at the W, Westwood) and a huge banquet.

I texted her while the show was on, “U watching this?”

I let her be and watched her make a brightly colored Quinceanera cake for the elimination round.

This morning we had to talk.

“When we walked into the Top Chef kitchen, live rattlesnakes coiled in a glass aquarium, and I guessed what our quick fire meat was.  But, we all thought that in those wood boxes in front of us live rattlesnakes waited for the killing, skinning and butchering.”

As you may have seen, they were already done in and ready for preparation.  However, “I did not want to touch that thing with my hands,” Dakota admitted.

“Bland. It was chewy with a milky texture,” she disclosed.  “You will never find it on my menus, ever!”

Next week it’s a Top Chef Texas rodeo.  My rodeo stories pale to my reptile encounters, but I can’t wait to watch Dakota jump into this arena.