Why I Love My Pricey Juicer 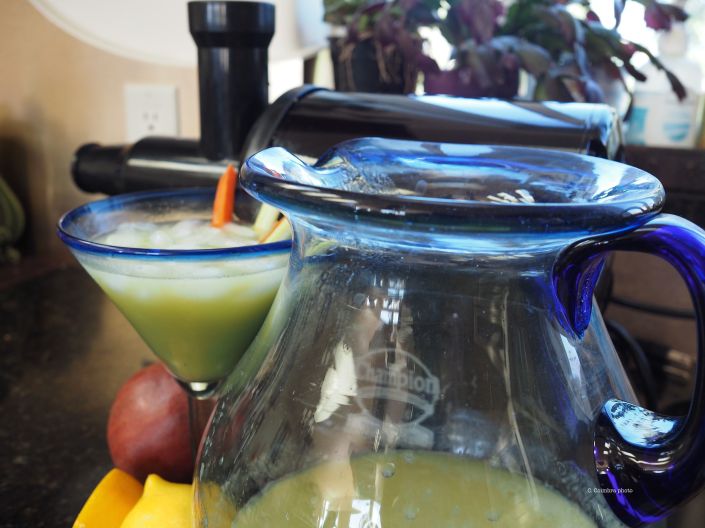 When was the last time that you slurped up a rabbit float? I’m craving one right now. And when I finish making my point about using a quality juicer, I’m going to hop into my kitchen, push a batch of fresh organic carrots through the juicer, pour eight-ounces into a blender with a scoop of vanilla flavored protein powder, and two scoops of honey vanilla ice cream, and get to slurping. And that is a rabbit float.

Juicing proponents say that juicing can reduce your risk of cancer, boost your immune system, help you remove toxins from your body, aid digestion and help you lose weight. I don’t know if all those claims are true, but I do know that now in my post menopausal years, I feel increased physical and mental energy when I focus on drinking fresh raw fruit and vegetable juices.

One of my friends, diagnosed with a serious health challenge, has taken to juicing. She wrote, “I have much more energy, people comment on my skin all the time, and I have stopped my nasty meds other than my IVIG infusions. My restless leg is gone, and I have had that all my life. The pain in my feet has reduced to a tolerable level without meds and I haven’t had any increase in my symptoms.”

I might add that she looks fabulous in her maturing years.

The Mayo Clinic addressed the juicing issue with, “…there’s no sound scientific evidence that extracted juices are healthier than the juice you get by eating the fruit or vegetable itself. On the other hand, if you don’t enjoy eating fresh fruits and vegetables, juicing may be a fun way to add them to your diet or to try fruits and vegetables you normally wouldn’t eat.”

Some juices may interfere with medications. From Web MD, “Check with your doctor before doing a lot of juicing, so you can avoid any potential problems. For instance, large amounts of foods high in vitamin K, such as kale and spinach, may change how the blood thinner warfarin works.”

If you have never juiced before, the first thing is to purchase a juicer. Before I express my opinion, I’m going to share some of my juicing history.

During my college years, I worked part-time at a health food store where I ran the juice bar. That’s when I learned about rabbit floats. Folks scurried right up to the bar, “I’d like a rabbit float, please. And hop to it!” We bought carrots by the 25 pound sack, which we depleted in less than two days. That’s a whole lot of juicing. We used a commercial Champion Juicer. It was fast, never overheated or bogged down from the work load, and it was easy to clean.

At the time, that kind of juicer was outside of my budget. But I did buy a moderately priced American-made juicer in 1978, when my children were little. It was a good juicer, but a real pain to clean. (It was a centrifugal style juicer that requires extra work to clean.) Last year, when I pulled it out to whip up some raw juice for a Sunday morning treat, and my daughter was about to have her 40th birthday, and I reminisced about the rabbit floats that I used to make for her as a child with that juicer, the question was asked, “Don’t you think it’s time to get a new juicer?” That juicer was about to turn 36-years-old. It still worked. I put it a garage sale for free. A young woman with three kids in tow, snatched it right up and gave me a year’s worth of thank you.

Now kind of retired, I’m mindful of the money that I spend. So I went to our local big box retailer and bought what looked like a copy of my now 40-year-old daughter’s Cuisinart juicer. It was half the price. Within two months I learned it was less than half of the quality of my daughter’s juicer. 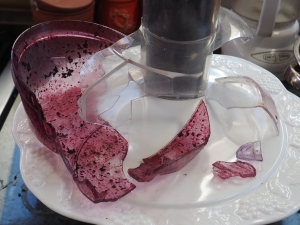 The bargain juicer literally exploded while I juiced grapes! A centrifugal juicer, the juicer’s strainer basket/shredder disk dislocated itself, blasted through the plastic top cover like a terrorist’s bomb. Then the shredder disk rocketed into the air, spun like a UFO, landing 20 feet into the living room. Grape remnants stuck to the kitchen ceiling, the dining room chandelier and cabinets—about 10-feet west—and some plastered the TV screen in a protective cabinet. Spouse freaked out because he thought that my face was sliced up and profusely bleeding. It was grape juice, even though sharp plastic shards shot about me like fireworks.

Yeah. This was the juicer mess from hell. It was also disconcerting. Who knew that I should have worn protective goggles when juicing?

The manufacturer responded immediately to my photo-documented complaint. They returned my $70 because I “wasn’t fully satisfied” with their product.

Now, I don’t dislike China. And my home’s decor is Asian-inspired. But I do not like much of what China produces. I’ve had little luck with most of their manufactured products. Compared to that USA-made juicer that still gave me juice 36 years later, my exploding $70 made in China juicer was junk and a danger to society.

As I wiped the grape juice from my face, I fondly recalled those days at the juice bar when I pushed mounds of fresh carrots and other produce through that Champion Juicer. It was so easy to clean. I could run produce through it all day and stop only occasionally to clean the screen without dismantling the entire machine.

Did they even make Champion Juicers any more? I never saw one in the high-end kitchen gadget catalogs, and definitely not in the big box stores.

Yes, Champion Juicers are still made, and made in America—Lodi, California to be exact.

I don’t know how many more years I’ve got. Just in case it’s another 36 years, I bought a Champion Juicer this round. Love it.

Now, my friend swears by her Omega 8008. I watched her make one of her favorite drinks with sweet potatoes, green apples, lime and ginger.

Like my Champion, her heavy-duty juicer masticates the juice that drips into a bowl, and continually spits out the pulp into a separate catchment unit. This makes for easy cleaning.

Centrifugal style juicers are usually less expensive (like my exploding juicer—and like the juicer that lasted forever). My Champion has a heavy motor on it—but a motor that is likely to last longer than me. But, it makes the juicer a permanent resident on my kitchen counter, whereas a centrifugal juicer is easier to store.

My advice after years of juicing, consider your new juicer an investment in your well-being. In the matter of juicing, price matters. I can safely say that the higher the price, the better the quality, especially when juicing becomes a part of your lifestyle.

Now, I’ve got a rabbit float to make and slurp.

Juicing favorites from my juicing friends:

When I feel punk I go… get a flu shot, ginger, lemon and cayenne juice. I feel instantly better. Dinner is often carrot and celery with a green apple or beet juice. I could live on beet juice.

We have one juice we really like copied from a place called Juice Ranch, they call it the “Jalapina”. Pineapple, cucumber, cilantro, lime, jalapeño, and mint.

For greens, I like parsley, kale, spinach, celery, lemon, and ginger. I often just throw in everything I have. Another really tasty one I made up was grapefruit, fennel, mint, cucumber.

For a morning pick me up, I love carrots and pineapple together with ginger. When golden beets are around, I toss a beet into the juice, as well.